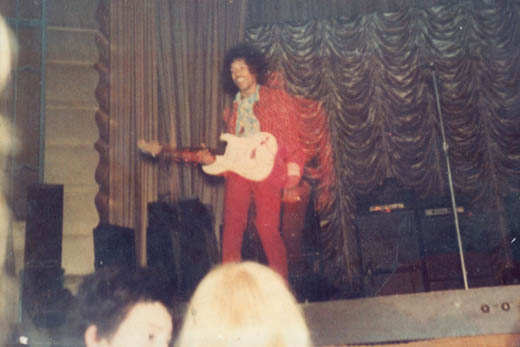 Extract from the Brighton Gazette 8 December 1967

Music to get your teeth into…

For many of the near-capacity audiences-comprising a large cross-section of Brighton’s young adult population – it was probably the first time that they had heard music at the right level of amplification, free from complaints by landladies and neighbours. The main attraction was Jimi Hendrix, the 22-year-old American negro who based himself in England just over a year ago, and he was well worth the billing. Long-limbed in his flash gear, he strolled on the stage playing his guitar with one hand only. He played it with his teeth, on the floor, and behind his back. “Remember you’ve gotta practice every day” he cracked. Meanwhile, bass guitarist Noel Redding filled in the thick, warm backing for the songs which included the original Hendrix hits of “Hey Joe” and “Purple Haze”.

He closed the show with “Wild Thing” a hard, tearing version of the Troggs’ hit that sent vibrations clear to the waiting crowd outside.